The Burden of Schizophrenia

Despite being a disorder with relatively low prevalence, schizophrenia is ranked among the top 25 leading causes of disability1. Even with best practice treatment, outcomes are often suboptimal given the complexity of the disorder and its wide-ranging consequences.

Although there are considerable differences in the distribution of costs and service utilization for schizophrenia around the world, the global economic burden of schizophrenia is enormous. The main components of cost are associated with direct healthcare costs (eg, inpatient costs, outpatient costs, emergency department visits, prescription drugs), direct non-healthcare costs (eg, law enforcement, homeless shelters) and indirect costs (eg, unemployment, lost productivity, premature mortality, caregiver time). Recent examples of analyses conducted to estimate costs in schizophrenia include a systematic review of studies from 24 countries in 4 regions (Europe, US, Asia-Pacific, Africa) where the annual costs ranged from US $94 million to US $102 billion2. In an additional US study, the estimated cost of schizophrenia was $155.7 billion for 2013, with the largest contributors to excess costs associated with unemployment (38%), lost productivity (34%), and direct health care costs (24%)3. Indirect healthcare costs were the main drivers of excess cost in both of these analyses.

In patients with schizophrenia, decline in mental function and social relationships over time can lead to social isolation, stigma, worse functional and cognitive impairment, reduced quality of life, and poor physical health, which creates burdens not only for individuals with schizophrenia, but for their caregivers and families alike4,5.

Schizophrenia is a highly heterogeneous disorder, with patient outcomes that can range from complete recovery to the need for comprehensive care. Unfortunately, complete recovery in schizophrenia is not the usual outcome15 and patients often experience impairments in social relationships, sustaining employment, and independent living16. Even after patients achieve remission from psychotic symptoms, deficits often persist because functional outcomes largely depend on the presence and severity of cognitive and negative symptoms, which are challenging to treat17. As may be expected, patients with schizophrenia have lower quality of life than the general population, with worse decrements associated with longer duration of illness, negative or depressive symptoms, medication side effects, and lack of family support. Among patients with schizophrenia, better quality of life is reported in younger people, women, married people, and individuals with a lower level of education. Treatment with antipsychotics that have a good tolerability profile and the addition of psychosocial treatments can also improve quality of life18,19.

Negative Symptoms Add to the Burden of Schizophrenia20–25

Negative symptoms are widely recognized as significant predictors of poor outcomes in schizophrenia. They carry a high burden of illness due to their pervasiveness, persistence, link to poor functional outcomes, increased costs due to higher healthcare utilization, and adverse influence on quality of life26,27. 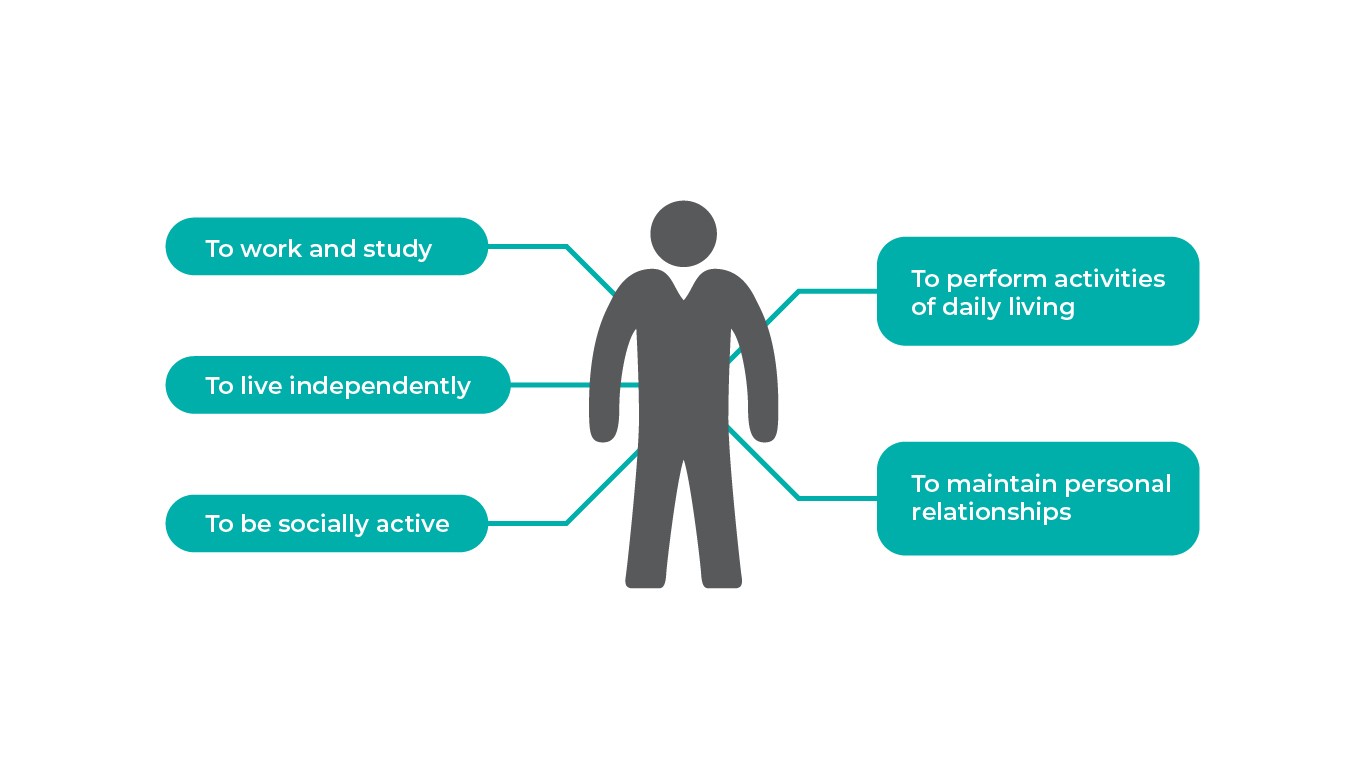 Within the negative symptom domain, motivational deficits appear to be one of the most important predictors of functional impairment, with evidence further suggesting a potential interaction between negative symptoms and cognitive symptoms in regard to impaired function28. The limited number of effective treatment options for negative symptoms is a serious unmet medical need that increases the burden of illness in schizophrenia.

Patients with schizophrenia often require extensive help with personal care, medication management, and everyday activities4. Family members make up the bulk of the caregiver population for people living with schizophrenia. In a survey, 68% of caregivers were identified as parents, 12% were siblings, 7% were spouses or significant others, and 7% were the children or grandchildren of the person under their care29. Caregivers may be negatively affected by work overload at home, sleep disturbance, financial problems, less spare time, stigma, and social isolation4. Studies have shown that many caregivers experience significant cognitive, psychological (eg, anxiety, depression) social (eg, stigmatization, isolation), and financial burdens30-32. Caregivers’ work productivity and careers suffer when they have to leave their employment or reduce their hours to care for someone.

Reduced quality of life of caregivers in numbers32 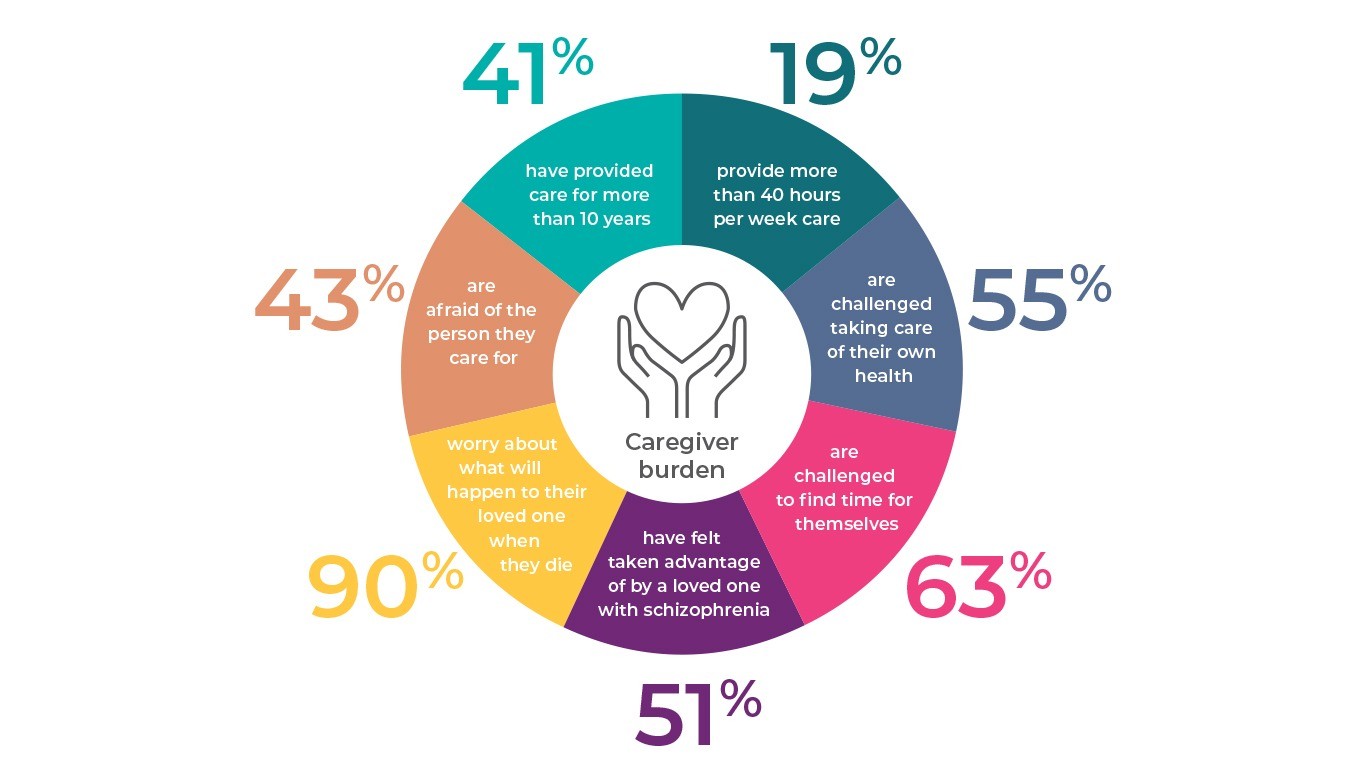 As may be expected, symptom severity, level of patient disability, and hostility are associated with higher family burden33,34, but studies have been equivocal regarding the relationship between positive and negative symptoms and caregiver burden. While some studies have linked positive symptoms to greater family disruption and embarrassment, others have found that dealing with motivational issues requires more caregiver time and energy35-37.

Subjective and objective quality of life in schizophrenia.

Schizophrenia affects patients, caregivers and society. Often caregivers are the ones who suffer most. 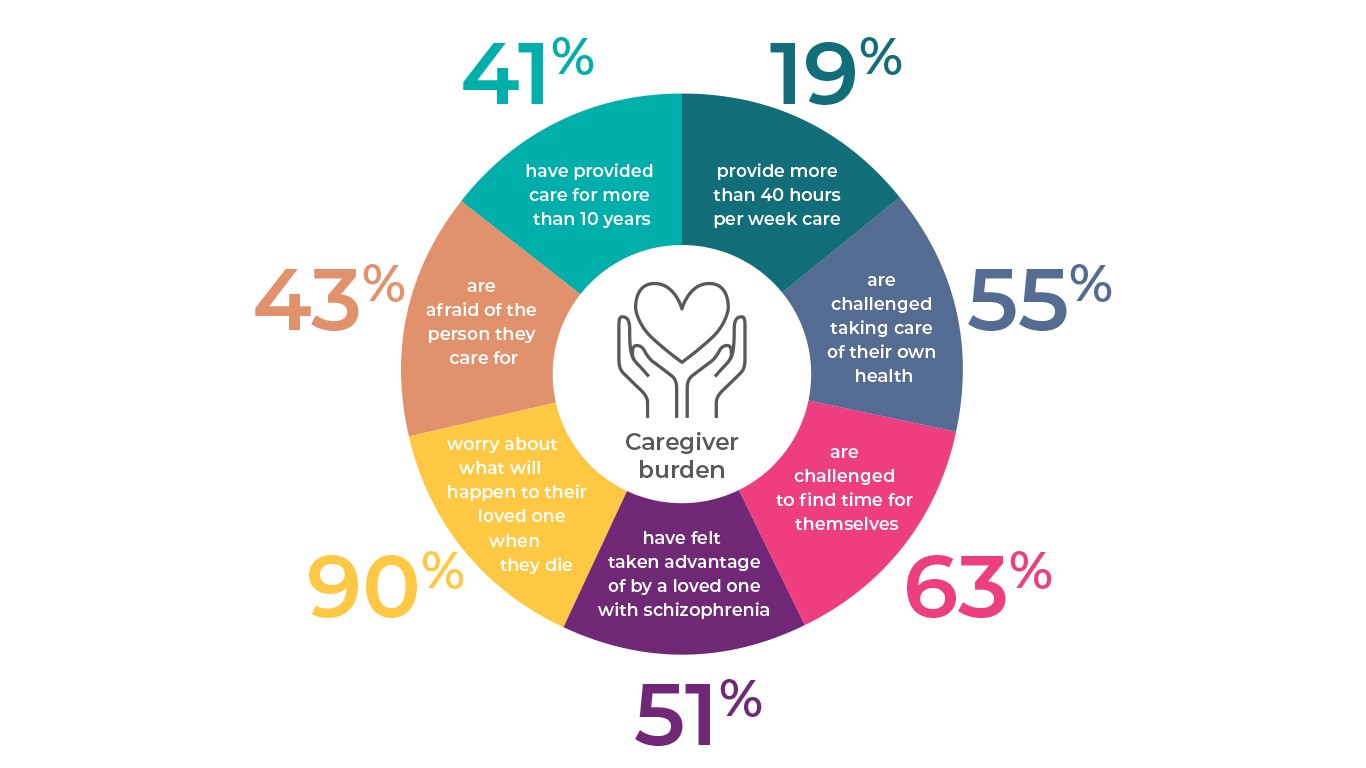