The Trouble With Primary Negative Symptoms

Cariprazine Versus Risperidone for the Treatment of Persistent and Predominant Negative Symptoms3,25 (Eudra CT number: 2012-005485-36)

Risperidone, an atypical antipsychotic with proven efficacy in schizophrenia, was the active control; 4 mg/d was selected as the target dose for risperidone to correspond to the usual daily dose for patients with stable schizophrenia and to minimize the occurrence of extrapyramidal symptoms8. Risperidone was chosen among the second generation antipsychotics based on the following reasoning: According to a large meta-analysis, four antipsychotics (olanzapine, risperidone, amisulpride and clozapine) are more efficacious than first generation antipsychotics in treating negative symptoms, although none proved to be superior over the other three9. Therefore choosing any of these medications as an active comparator for a negative symptom study could have been a reasonable option. The final choice was put on risperidone, because clozapine is not used as a first line treatment10 and olanzapine could have potentially unblinded the study due to its side effect profile (mainly weight gain)11. Amisulpride is used in two different dose ranges, depending on whether positive (target dose is 400- 1200 mg/day) or negative symptoms (50-300 mg/day) are to be controlled12. Since the aim of the study was to keep positive symptoms stable and to improve negative symptoms, the choice of the amisulpride dose would have been a difficult one to make; especially since this was a fixed dose study where in case of an impending relapse the dose of amisulpride could not have been adjusted. Additional aspects were that amisulpride is not available in various European countries and that it has a different side effect profile from that of cariprazine (higher incidence of sedation). Considering all these aspects, the decision was made to use risperidone as the best possible comparator, knowing there is no ideal choice.

There were 3 study periods: a 4-week prospective lead-in period, a 2-part, 26-week randomized (1:1) double-blind treatment period (2-week cross-titration where randomized treatment was up-titrated to the target dose and the previous antipsychotic was withdrawn; and 24-week maintenance of target dose), and a 2-week safety follow-up period. For double-blind treatment, patients received the target doses of cariprazine 4.5 mg/day (n=227) or risperidone 4.0 mg/day (n=229)3,25. 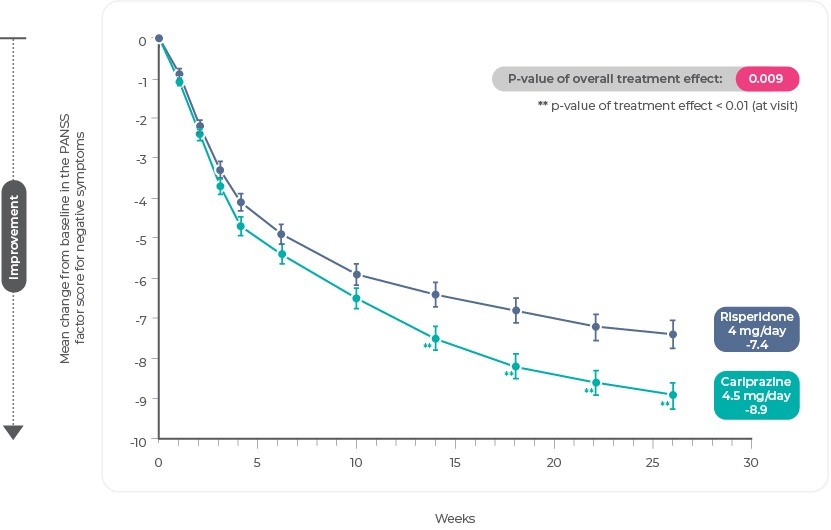 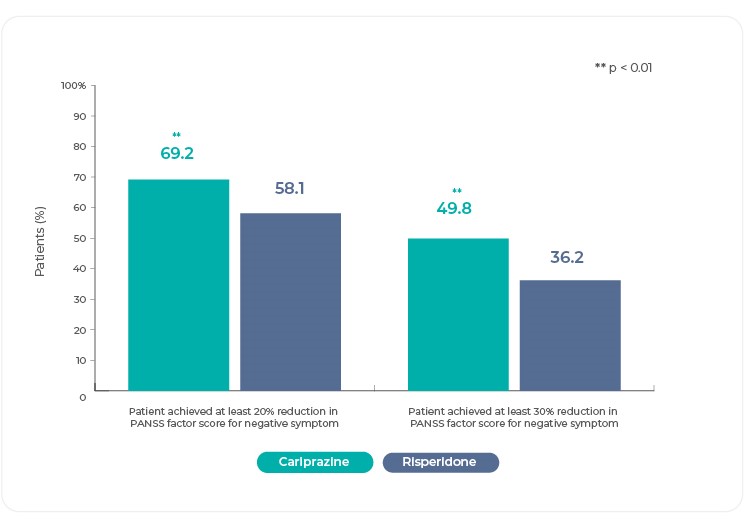 “To our knowledge, this trial is the first large-scale study done in patients with schizophrenia and with predominant negative symptoms that has provided evidence of clinically significant improvement for an antipsychotic drug applied as monotherapy; additionally, this study found a significant advantage for one new-generation antipsychotic drug over another.”3

Changes in individual negative symptom items as measured by the PANSS, and PANSS based factors were investigated in post hoc analyses4. The difference in mean change from baseline was statistically significant in favor of cariprazine versus risperidone on most items of the PANSS Negative Symptom subscale as well as on the overall subscale itself25. Of note, differences in mean change on several of the items that evaluate the key negative symptom constructs were statistically significant in favor of cariprazine: blunted affect, avolition (measured by N2, emotional withdrawal), asociality (measured by N3, poor rapport and N4, passive/apathetic social withdrawal)4,25. Although there is no item for anhedonia on the Negative Symptoms subscale, improvement for cariprazine can be inferred from greater change on items like N2 and N4, which suggest that patients are experiencing a lack of interest and less social involvement25. Interestingly, no significant between-group difference was seen on stereotyped thinking, but this item is no longer considered part of the negative symptom domain according to negative symptom factor analyses4. 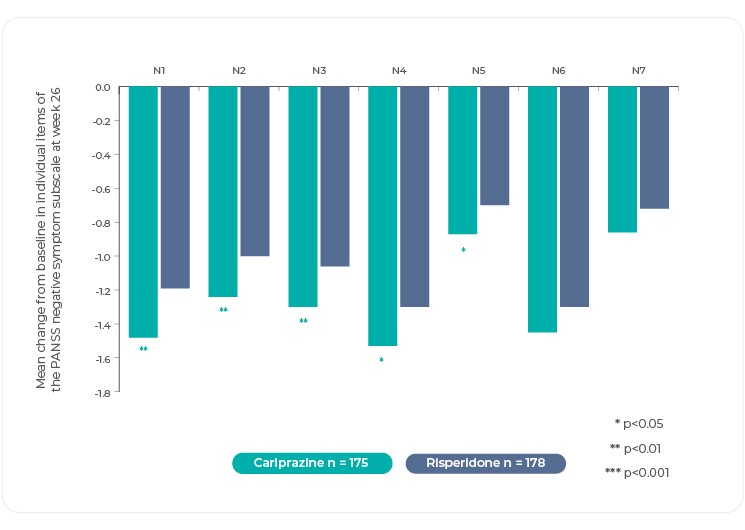 The structure of negative symptoms is multidimensional, with evidence generally supporting models that consist of 2 to 5 factors17. The most stable and replicated models have 2 factors clustering into the potentially related but distinct subdomains: diminished expression (blunted affect and alogia) and avolition/apathy (avolition, asociality, anhedonia). Data from the negative symptom trial evaluating cariprazine versus risperidone were evaluated in several PANSS-derived factor models13,18-23. On all factor models, statistically significant improvement was demonstrated for cariprazine versus risperidone4,25. 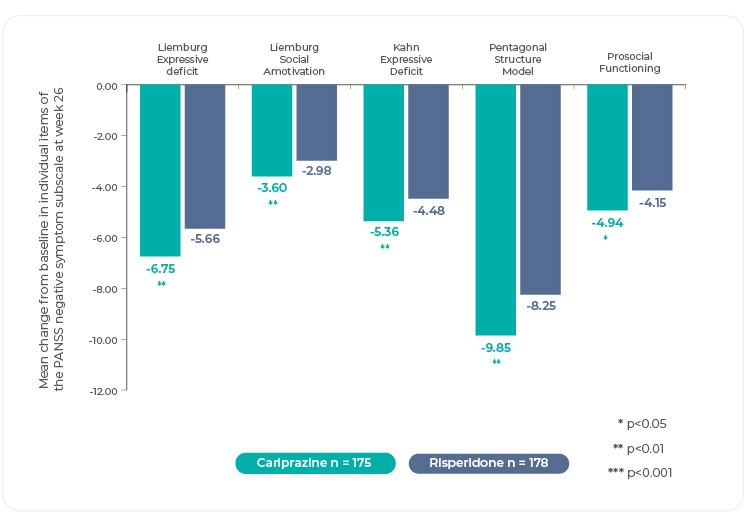 “Research suggesting that clusters of individual items may represent different fundamental pathophysiological mechanisms of negative symptoms indicates that improvement across symptoms and factors may imply broad-spectrum efficacy for cariprazine.”4

The efficacy of cariprazine in negative symptoms of schizophrenia: Post hoc analyses of PANSS individual items and PANSS-derived factors.