Can Substance Abuse Cause Psychosis?

What is Substance-Induced Psychosis?

Substance-induced psychosis can happen as a result of excessively using various psychoactive substances, such as cannabis, alcohol, hallucinogens and cocaine4. Misuse of those drugs may produce psychotic reactions similar to those experienced in schizophrenia.5

The use of such substances has dramatically increased, particularly during early adolescence, when the brain is still developing and can be especially sensitive to environmental exposures.5 Several studies have shown that drug intoxication can initially produce temporary, mild effects, that may worsen with time.5-7

Almost any type of intoxicating substances can cause psychosis, although the specifics of the symptoms tend to vary, based on the drug consumed. Psychotic symptoms may recede upon substance withdrawal, or they may persist for an indefinite period of time, while developing withdrawal symptoms is also possible.8

Some of the most common forms of drug-induced psychosis include:

1.     Cannabis-induced psychosis.
While psychotic episodes following cannabis intake are rare, some users may experience a cascade of delusions and hallucinations, along with feelings of paranoia and anxiety.9 The symptoms are generally short-lived and total remission can be expected.9

2.    Methamphetamine (METH)-induced psychosis.
Research has shown that METH psychosis is a prevalent health concern among recreational users.9 Frequent abusers of methamphetamine can lapse into frightening hallucinatory and delusional states that may last for weeks even when the drug is no longer being used.10 Recreational METH users are two to three times more likely to experience psychotic symptoms than non-users, especially if they started METH at young age.10,11

4.    Ecstasy-induced psychosis.
Ecstasy and other analogous substances have neurotoxic properties and can trigger psychosis.13 Most of the symptoms are positive, but negative symptoms are also present.13

Who is At Risk of Experiencing Substance-Induced Psychosis?

Drug-induced psychotic disorder is primarily related to substance abuse rather than substance consumption.14 In most cases people who experience these symptoms are either addicted to these substances or have been using them in unusually heavy amounts.12

The prevalence of psychotic episodes relates to:

Genetic abnormalities or family history of mental illness.15 Previous history of mental health disorders and/or psychiatric hospitalisation in the family, are widely accepted as the major risk factors for such episodes.15 Other factors, such as variation by place of birth and upbringing, migration history and minority status continue to court controversy, despite an increasingly robust empirical base.16,17 There is evidence that urban settings are associated with higher rates of psychotic symptoms18.  Selective migration to western countries may also contribute to a higher prevalence of psychosis.19 The association between migrant status and increased risk of psychosis has stimulated a great deal of research; the results from different studies around migration status point to the same direction, there is a higher prevalence of psychosis among minority ethnic groups compared with white population.18-20

Gender and age.18,20 Most studies claim that men and women have the same tendency to be affected. Psychotic episodes are more likely to be experienced by men at a younger age compared to women, but the association is still unclear. A systematic review in England indicated that the first psychotic experience appears at a younger age in men, often in their teens and early 20s, than in women.20 The exact mechanism has not been identified.21

Vulnerability. Several studies concluded to the hypothesis that, there is a shared genetic aetiology between cannabis use and schizophrenia, and schizophrenia risk increases the risk of cannabis use.31,32 Also, patients with schizophrenia or schizophrenia-like disorders have an increased vulnerability to compulsive use of drugs.22,23 Another explanation of the increased incidence of substance-abuse among patients with schizophrenia is the self-medication hypothesis. Narcotics are primarily used in order to deal with the negative symptoms of the disease, as well as drug use, in an attempt to decrease discomfort from the side effects of antipsychotic medication.23

Can Substance Abuse Cause Schizophrenia?

There is evidence that substance-induced psychosis is associated with the later development of schizophrenia.24
Substance abuse does not cause schizophrenia, but it can act as an environmental trigger.25 Using drugs such as cocaine, amphetamines and cannabis can increase the risk for or even induce schizophrenic symptoms and/or worsen their severity.26

As mentioned above, people with psychotic disorders choose ‘’self-medication’’ and use alcohol or other drugs to help them cope with their symptoms of psychosis.21,22  While this may provide some short-term relief from symptoms, alcohol and other drug use can make a person’s existing symptoms worse. In addition, some people find that they develop alcohol or other drug problems because they use greater amounts more frequently to cope with their psychosis. As a result, a cycle is generated where psychosis symptoms and substance abuse feed off each other (Figure 1).27 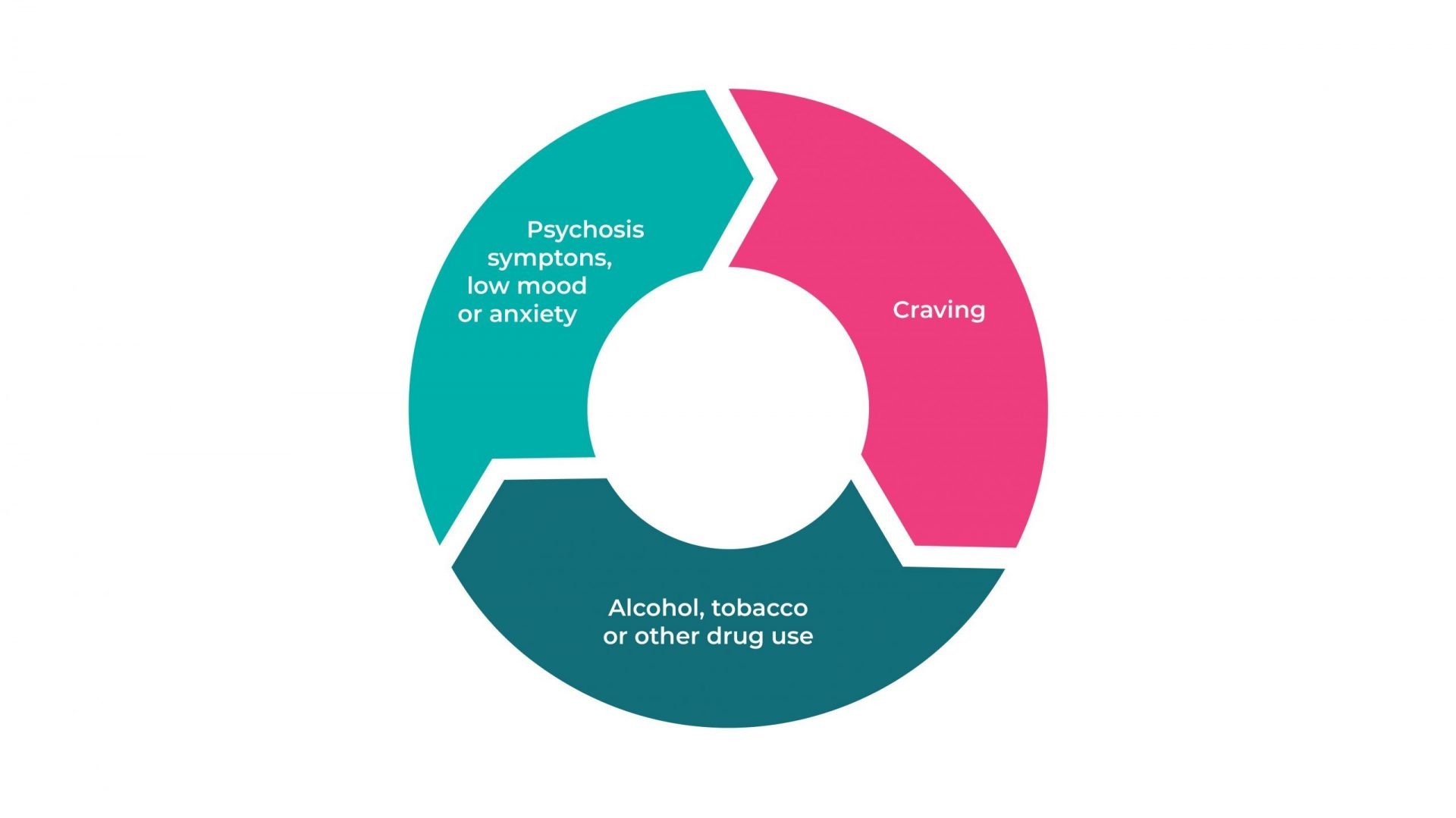 Cycle of psychosis symptoms, cravings, and drug use

What Treatment Should Be Offered?

The main focus of treatment for these patients focuses on stabilisation of psychotic symptoms, hostility, and agitation.23

Several new antipsychotic medications have been introduced and appear to be safer and more effective than typical antipsychotics.28 In the early stages of recovery, people may transition from medical detox for the safe management of drug withdrawal to psychiatric hospitalisation.29 Addiction and mental health clinics host inpatient treatment programmes to help the patient to achieve a more stable state of mind, while removing the influence of the illicit substances that provoked the disturbing outbreak of psychotic symptoms.26

After this programme is complete, the person affected by substance-induced psychosis will move on to outpatient treatment and aftercare.28 Complementary treatment methods, like holistic mind-body practices and life skills training, may also be offered based on the needs of each individual patient.30

Overall, substance-induced psychosis is a sign of serious mental health disturbance. But with expert support and intensive continuing care, people can overcome the worst of their symptoms and regain their ability to manage their own lives.